Growing up I was an avid horseback rider. I started out in middle school as a volunteer at Equest Center for Therapeutic Riding (on the West Side of Michigan where I grew up). Once a week the volunteers were allowed to take riding lessons--I was hooked. Throughout middle school and high school I was a competitive horseback rider showing Hunter/Jumper around the state of Michigan. Most of my days were spent juggling school school and my responsibilities at the barn, but I wouldn't have had it any other way. It took a lot of hard work and dedication, but those are life lessons that will stay with me forever.

After college I got married and we both started full-time jobs. I was never someone who worked out a lot, but being active took a backseat to jobs and starting a family. A huge turning point in my life was a year after the birth of my second child. I vividly remember getting his one year photos back and thinking "there is no way that's me in that picture." I knew that myself and my husband had gained weight over the years, and that having two kids 15 months apart didn't help me, but seeing those photos really opened my eyes. I needed to change. What started as counting calories became an overhaul on our way of eating. In January of 2015, six months after starting on my weight loss journey, I walked into my first fitness class at Mitten Fitness. I didn't know at that time how much of a profound impact it was going to have on my life. I started attending classes twice a week. After about six months two classes a week became three and before I knew it I was a Mitten Fitness regular. I went from having never touched a barbell in my life to losing 50 pounds and doing things I never thought someone like me could do.

When I tell people "If I can do it, then anyone can" I really mean it. I want everyone to see and learn what they are truly capable of. I love it when someone works hard and achieves a goal they set for themselves and any part I can play in making that happen is icing on the cake! I understand what it's like to struggle with weight and to try to find time for yourself and your own fitness with a job and a family responsibilities--I've been there. Heck, I'm still there! That's one of the reasons I love Mitten Fitness... everyone at our gym truly wants to see each other succeed and I'm so happy that I get to play a part in our members' journeys! 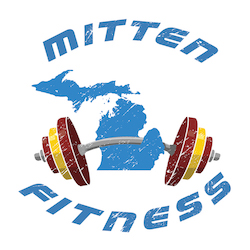